My Life is Like Death - Defect Defect EP Review

“My Life… is Like… Death” – Defect Defect lurches into their disorderly and existential final act. 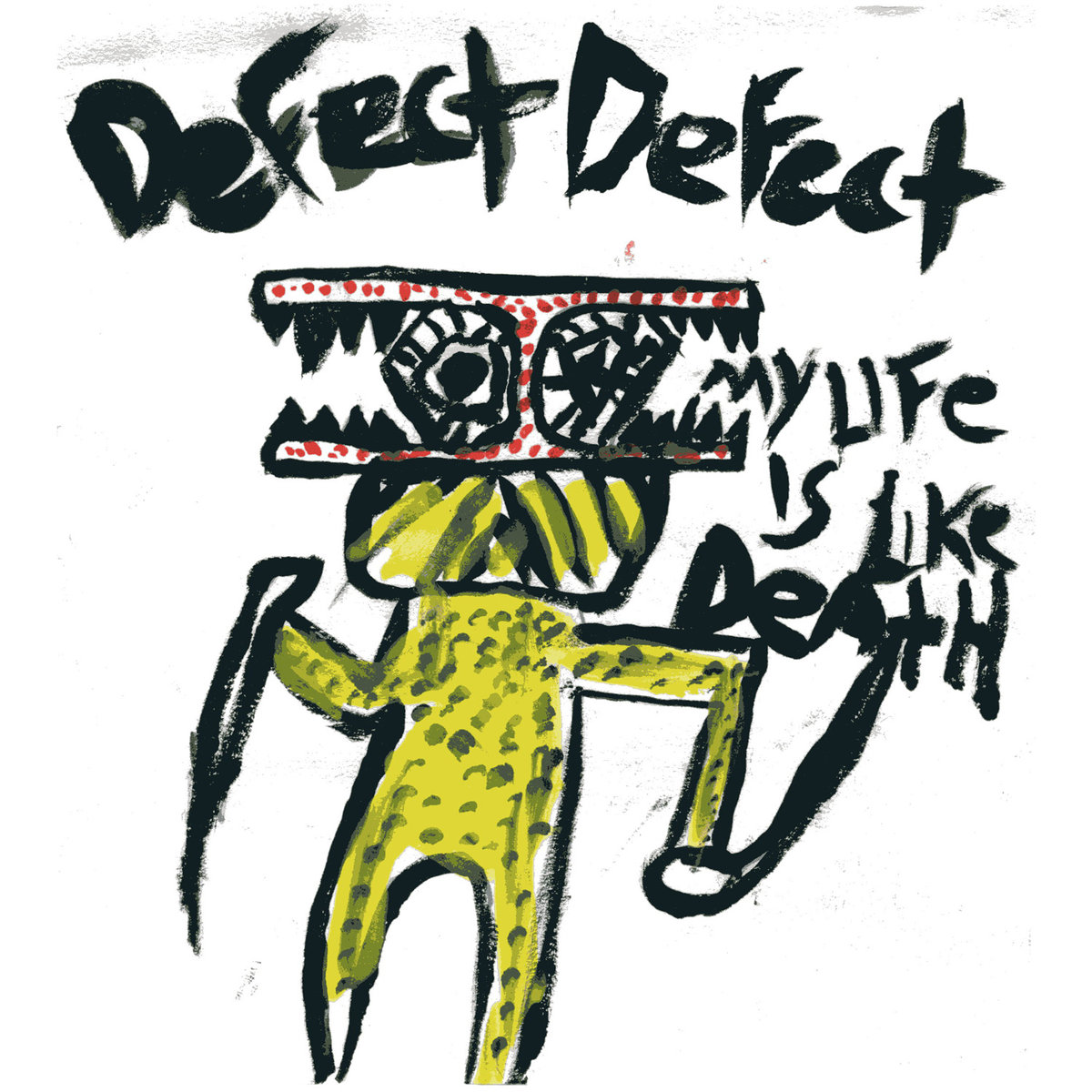 Yes, there is a beginning and an end but whatever order lies in between is not stitched together by time and repetition but rather, sheer will. An 8 minute story of life’s lessons and the agony of its mystery, each song meditates: “I’m not right and I’m not well I’m merely me”, “Life goes on but I’m too far gone”, “no more suffering, no more waiting for tomorrow”. Every groove of this 7” is pure Portland punk but they aren’t the usual catchy tunes dressed in a heavy coat of distortion.

“My Life is Like Death” listens like its album art looks. Hard to digest. Whether by design or not, anyone that gives it a chance will come back again and again, but not because they crave the satisfaction of resolved power chords nor the scintillating call of a catchy chorus, but because of a hunger for a different kind of sound (Which isn’t to say these songs are bereft of the sugary kind of catchiness, its there, but only in sweet seconds).

The EP’s title track “My Life is Like Death” is a song best described by silence. Quiet moments are torn from vocal chords and hissing feedback - raw anger busts in unexpectedly– Outbursts ranging from blunt screams to groovy oooOOOoooh’s. Elongated silences punctuated with jagged rhythms push the listener through a dark and ambiguous big picture. This might be a more apt metaphor for life than two and a half minutes of verse chorus verse chorus.

“Wrong With Me” comes closest to the typical Defect tune but even this one stands out when compared to the band’s library. It opens with choppy awkwardness and somehow falls into a heated groove. The second of three tracks, this song takes the momentum from the first one’s rocky start and transforms it with the roll of a relentless bass line. “Wrong With Me” moves with an ugliness that seems alien but is so true that it hits close to home.

Chronologically “Glass Crass” may be the last Defect song ever, yet with its parting words “Other punks can make it real” it feels like a new beginning. Six minutes in and the record hums on all cylinders- what started with long drawn out pauses gains steam and breaks out into an unstoppable two minutes. Measured dialogues collapse into bellows - It’s all or nothing - We will be defeated unless we all band together - “we could actually do this”. Anyone familiar with Defect will know that this message has been at the heart of all of their releases.

After seven minutes of awkward contortions and arty catharsis, these last thirty seconds bring Defect back true to form. The record ends and the past eight minutes show a band that’s grown, that’s changed, that’s “got psychological problems”, but at its heart has always been the same.

Looking at the band’s discography, “My Life is Like Death” book ends a coming of age story, and like the best of them, this one doesn’t hold your hand. The insane strokes on the amplified canvas would seem amateurish if they were made by a less experienced band. The completely odd timing of the title track and the narrative of “Glass Crass” too would not work when performed by a group without history. Better bands have less variety even on lengthy LPs. Maybe that is what keeps me coming back to it. Similar to an abstract expressionist painting, its streaks are big and dark and simple and altogether ambiguous but make no mistake, though they seem erratic, they are intentional. The dark lines here are not the disposable kind pointed to with makeup and moodiness but the kind that lie at the bottom of a fissure, the kind that line an aging face.

Listeners in need of a tune to stick in their head have found the wrong place - A hook surfaces in each song, but they reveal themselves sparingly. Stray riffs and lyrics stick in a different way, that is, rather than an obedient echo, as if chained to the repeat button, they will jump up and bite. In fact, to play one song by itself is only one third of the experience. The momentum that builds over the course of the EP and ends with a crackling breakthrough is completely cathartic and not to be missed in favor of one’s favorite track. In this way too, it better resembles a story heard and to jump in out of sequence would hold dissonance and spoilers. This story-like quality bleeds down from the whole EP into the individual songs as well. Each tune employs its own tricks that deviate from the usual punk formula. Of course, it isn’t completely experimental as they all have a chorus, but, rather than march on predictably, they - like déjà vu - emerge from the ether slightly different but still recognizable and truer now than they were earlier.

Every compositional jerk moves into a new groove. Its clumsy transition into grace is miraculous and one I can’t really describe but can only listen to. I’ve got to rely on poetry —because there is something here and I can’t quite describe it. Its dark and its slippery and its electrically charged in speakers and ground out with vocal chords and struck dumb with plastic picks and metal strings. The diversity in each song and all the songs together makes that- whatever it is - known. In this way, the seriousness of this EP’s theme just cannot be ignored nor answered but instead contemplated.

The problem with this release is exactly what makes it great. Defect Defect’s final iteration is one of growth and because of that it’s hard to come back from. After examining the record so thoroughly for this review, it’s different for me to listen to the band’s prior tracks that I fell in love with years ago. The last chapter to the Defect story contextualizes the rest of the discography and fittingly finishes a sort of sonic narrative - a story about a band’s adolescence and growth into maturity. At first pointing the heavy existential finger at everybody else (“People my age”, 2006), and then their audience (“Ex Punk”, from 2010’s LP) and finally themselves (“My Life is Like Death”/“Wrong With Me”, 2015), to ultimately culminate in a two minute and fifty-nine second story that encompasses all of the above and is at the same time deeply personal. That said, I cant help but feel like i’m missing something. Now that Defect has arrived at this point, it feels like the stage has been set for something bigger, like theres more to come. The record needle rides its final rotations into silence and my curiosity narrows. Sharpened by the band’s last exhortations, I’ve got to wonder, “whats next?”.