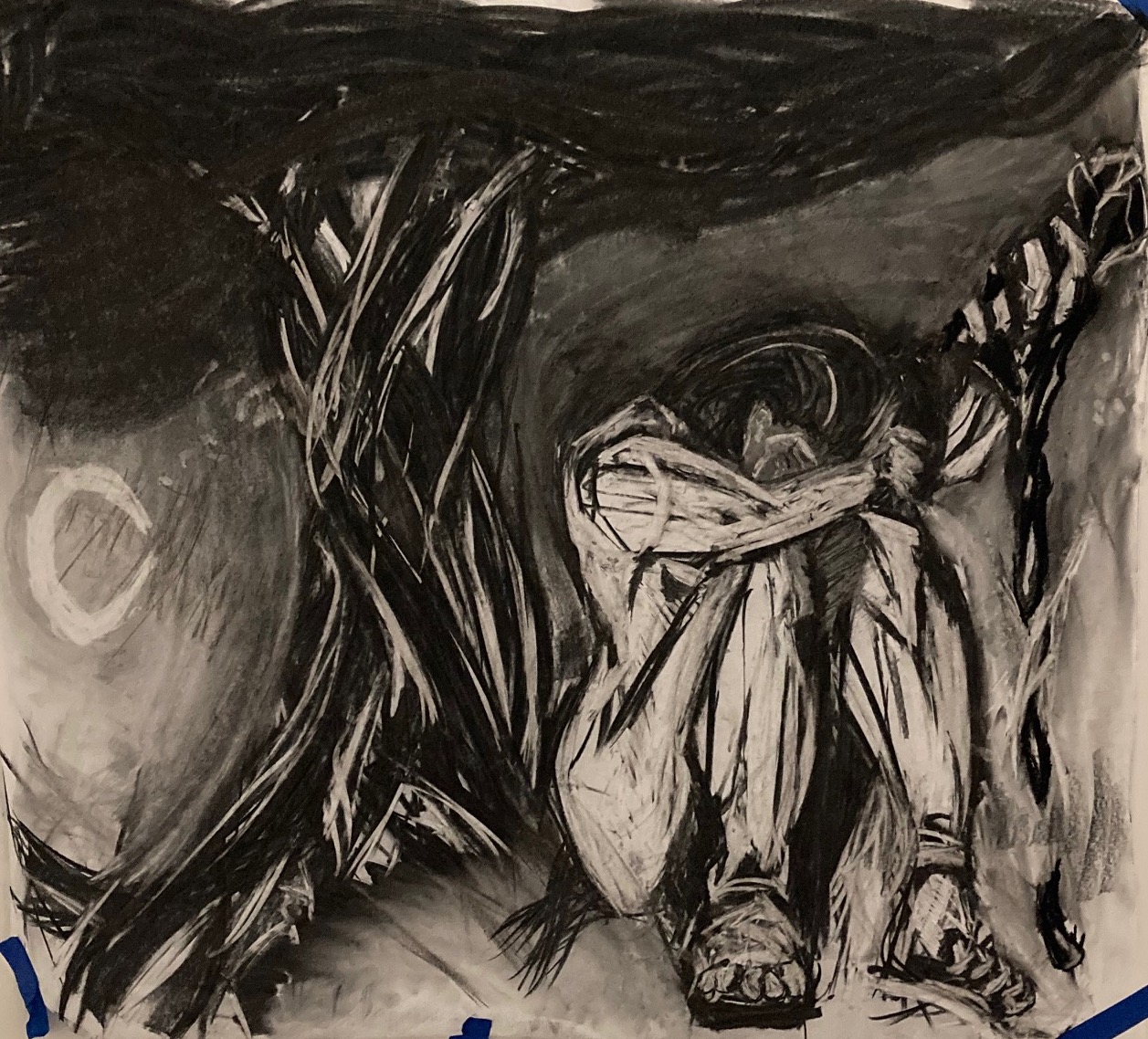 I am new to embracing sorrow as essential rather than trying to cure it. In 2021, I hope to continue to allow myself to recognize and honor this.

Drawing, especially gesture drawing, lets me meditate and deal with whatever I’m feeling at the time. The marks themselves are therapeutic but I hope to have finished image to tell a story. The illustration is something that I saw in my imagination. I knew that she would be a sorrowful figure baring something in her hand. I still have a long way to go as a draftsman, but this piece got me thinking.

Martin Buber described emotions as being characterized by extremes: “Every feeling is conditioned by its opposite”. If this is the case, then happiness is known better by sadness. The way the brightest white meets the darkest dark, side by side, they form an edge and a more intelligible form emerges from the gray. Total balance might be considered grayness- somewhere predictable, where the future is known and therefore is already the past. To know sorrow and joy is to reckon with the churning of the world and within our selves. That feelings come and go, sometimes for no reason at all. Part of sorrow, and joy, is that they visit us almost unpredictably.

A mentor of mine taught me that the there was a difference between the sublime and beautiful. Mt. Hood jutting from the horizon is beautiful but St. Helen erupting is sublime. Why? because its temporal show of beauty also reminds us of our own mortality. From a distance it is beautiful, up close, terrifying- at once and for a short time, it is both. Just so, one cannot really know happiness without sorrow.

In our culture sorrow is looked at as a problem to be fixed. Feeling sorrowful, it is not as though you are broken, much less in need of “fixing”.

I felt sorrow very regularly as a kid. I had not yet learned how to handle it though I would certainly let myself feel it. When I did express my dread, it meant there was something wrong with me. It was a feeling that welled up on its own, as emotions do, because of a certain sensitivity or sometimes without reason, but most often it came from curiosity and existential questions, as a natural consequence of contemplating life and death. It visited me often as I grappled with growing up and steadily learned the degree to which I misunderstand and to which my own soul is misunderstood. The fulfillment in this kind of growth is not something that can be so easily displayed or proven but the sadness can be palpable. To a culture so troubled by sorrow and obsessed with pleasure, those feelings signal that something needs correcting. After all, children are expected to always be happy.

But sorrow too, can educate. Feelings of sorrow can indicate that we’ve survived loss or change, and that event needs its proper dignity. I think it’s different for everyone, but as an artist or rather, a person who sees the world emotionally, to ignore or try to “solve” these feelings in some way, may provide some relief but exacerbates a far more lethal kind of a hurt. A hurt that I do not own, but is rather subjugation, a kind of shackling. To be honest, I don’t quite understand it as of this writing, What I know is that to not express these feelings is not my way, and to yield to another way is, for me, a kind of prison.

In writing this, I don’t want to argue that one should wallow in sorrow. My point is not to obsess over sorrow or allow it full reign of our lives but to feel it. Allow it to run its course and learn our individual ways of dealing with it, rather than try to fix or cure it.

Of course, there are limits, and without light at the end of the tunnel and the faith in our own hands to reach with, we are lost in the dark. My point is to bear it and to continue to learn as we sharpen our gaze towards hope, rather than go numb. I would go farther, because to ignore sorrow and constantly reach for joy is not at all a gray kind of balance, but rather a a grotesque over compensation. To grow in this way, in the name of a conquering kind of optimism, is bravery without fear, that is, a brutish recklessness. That kind of growth cultivates our barbarous sides and lets the rest atrophy. To proceed so uncritically is to pursue the stuff of movies and 1950’s sitcoms (the suburb of Edward Scissorhands comes to mind). To recognize the dimension of myself that is attuned to sorrow makes me feel that much more whole- I can push forward with everything I’ve got. Rather than a forced march - an undignified trudge, my stride, more full with sorrow and joy, strikes with the heat of something alive and steps into the unknown.